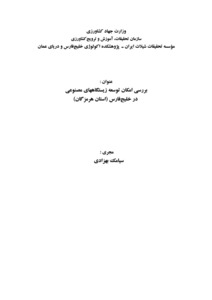 Persian Gulf waters (areas of Hormuzgan province) in order to determine the best location for installation of Artificial reefs were studied seasonally from December 2006 to March 2007. Distribution of funa and flora and estimation of deposit depth by SCUBA diving method, density and frequency of macrobenthose communities, frequency of ichthyoplankton communities, determination of organic carbon (OC) and Grain size and measurement of water physical factors including salinity, saturation oxygen, dissolved oxygen, temperature, chlorophyll a, in transect and subtransect was studied for recognizing the best placement to installation of artificial reefs. All areas of Shipping, military areas, around of Islands, natural habitats and entrance to jetty were introduced for excluding areas. South of Qeshm Island (transects of Bahman jetty, Bandar Masen and Bandar Salakh) are catching area for small pelagic (sardine and anchovy fishes), therefore in these areas installation of artificial reefs have confined with this restriction. Also entrance to Bahman jetty, sea plant habitats (sea grass and algae) in transects of Bahman jetty and Bandar Masen were considered as restricted areas. In this area, suitable areas for installation of artificial reefs was determined based on distribution of Ichthyoplankton societies for every transect, for macrobenthose enrichment Bahman jetty transect was calculated middle, but transects of Bandar Masen, Hengam island and Bandar Salakh was done good indicator. The deposition depth in transects of Bandar Masen and Hengam island was determined as good factor but this index was known as average factor for transects of Bahman jetty and Bandar Masen. Also, two another indicators, primary production and bottom sturdiness, were calculated as middle factor for Bahman jetty transect, but these indicators were known as good factors for other transects in this area (Bandar Masen, Hengam island and Bandar Salakh). The results of these indicators in transects of Bandar Kong and Bandar Bostaneh in Bandar Lengeh area was indicated that T. O. C and bottom sturdiness indices had no significant difference (p>0. 05) and the whole of these transects had average priority. Bottom sturdiness, primary productions and macrobenthose communities indices had difference in Bandar Lengeh area (p<0. 05) and these indices had average priority in Bandar Kong transect and had good priority in transects of Bandar Bostaneh and Bandar Hasineh. Ichthyoplankton community had average priority for Bandar Bostaneh transect, and had good priority for transects of Bandar Kong and Bandar Hasineh. The good priority has obtained for transects of Bandar Charak, Bandar Gorzeh and Bandar Chiroeyah. Also Macrobenthose community, primary production, water physical factors and bottom sturdiness were known as good, good, average and weakness priority respectively for transects of Bandar Charak, Bandar Gorzeh, but primary production, bottom sturdiness, water physical factors and macrobenthose community were resulted as average, good, good and average priority respectively for Bandar Chiroeyah transect . T. O. C index was determined as average priority for transects of Bandar Gorzeh and Bandar Chiroeyah and good priority for Bandar Charak transect. Finally, excluded areas maps, suitability areas maps and feasibility areas maps were drawn by Arc GIS software. In this survey, layers between 10 to 20 meters depth were recognized as the best position for installation of artificial reefs.