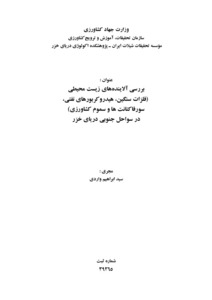 Recently, the ecology of the Caspian Sea coastal has undergone with increasing development of human activities and industrial wastewater discharge. Therefore, considering the current situation, evaluate of pollutants issue in the Caspian Sea is very important. Results of this study showed that levels of heavy metals (Cd, Cr, Cu, Fe, Pb, and Zn) of water had lower than standard and also acceptable for aquatic life. Significant accumulation of metals such as Co, Cu and Cr in the sediment was observed at transect Sefidrood and Anzali in comparison with six other transects (Turkmen, Amirabad, Babolsar, Noshar, Tonekabon and Astara) and for Ni at transects Sefidrood and Astara compared with six other transects (Turkmen, Amirabad, Babolsar, Noshahr, Tonekabon and Anzali) (P<0.05). The amount of Zn in fish muscle Liza saliens was maximum and then metals such as Fe, Cu, Pb, Cd, Ni, Hg and Co were recorded (P<0.05). In the north of Iran, two kind of bony fish, such as R..frisii kutum and Liza.s have maximum catchments as compared with other bony fish in the Caspian Sea. Based on calculation of risk of Target Hazard Quotient (THQ), we obtained THQ was less than one for all metals in young and adults human. Thus, consumption of R..frisii kutum and Liza.s per capita with 6 kg will not be at the risk for young and adults. Among of oil derivatives, polyaromatic hydrocarbon (PAHs) is hazardous compounds in the environment. Environmental Protection Agency (EPA) was announced 16 compositions of PAHs as an index. The results of this project showed that concentration of two and three rings of PAHs was lower than 4, 5 and 6 rings of water, sediment and fish at most stations and seasons. Among of 16 PAHs, only Benz(α)anthracene, chrysene, Benzo(α)pyrene and Dibenz (α, h)anthracene compounds were contained with ecological risks (HQ) more than one in the water and sediment. In addition, three compounds such as Chrysene, Benz(α)anthracene and Benzo(α)pyrene were observed in the edible fish tissues (Liza.s and R..frisii kutum) which have high ecological risks in the water and sediment. During four seasons (spring, summer, fall and winter), maximum concentration of organochlorine residue in the surface water (5m depth) were belong to β-Endosulfan (Turkmen), Dieldrin (Babolsar, Tonekabon) and endosulfan sulfate (Astara) and at 10m depth were γ-BHC, Dieldrin compounds (Tonekabon), DDT (Turkmen) and Aldrin (Babolsar). This values at 50m depth were belong to γ-BHC (Anzali), δ-BHC (Tonekabon), Dieldrin (Amirabad), and heptachlor (Amirabad). Maximum percentage of organochlorine pesticides residue in the sediments was belonging to only Aldrin compound at stations Turkmen, Babolsar and Tonekabon. In addition, maximum concentration organochlorine pesticides residue in fish tissue (Liza.s and R..frisii kutum) was DDT and Endrin aldehyde compounds. Mean surfactant concentration (LAS) of surface water (5, 10 and 50 m depths) at eight transects was 0.017±0.049 mg/l. The maximum concentration of LAS were 0.084 mg/l and 0.082 mg/l in spring and summer (Anzali transect), respectively. This value was 0.035 mg/l and 0.060 mg/l in autumn and winter (Sefidrood transect), respectively. As a conclusion, the concentration of surfactant in the Caspian Sea basin is not critical as compared with standard level.