Study on Viral Nervouse necrosis (isolation, characterisation and pathogenesis) in Golden grey mullet in the Caspian Sea and study of pathogenecity and possibility of transmission to the other fish species (Sturgeon fishes, Rutilus frisii kutum and reared Rainbow trout and Carp) 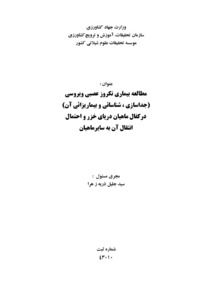 Study on Viral Nervouse necrosis (isolation, characterisation and pathogenesis) in Golden grey mullet in the Caspian Sea and study of pathogenecity and possibility of transmission to the other fish species (Sturgeon fishes, Rutilus frisii kutum and reared Rainbow trout and Carp) Viral Nervous Necrosis (VNN) is a worldwide disease affecting several species of cultured marine fish. For the past two decades, betanodavirus infections that cause Viral Nervous Necrosis (VNN) have emerged as major constraints on the culture and sea ranching of marine fish in almost all parts of the world. More than forty species mainly of marine origin have been so far affected and this number is likely to rise in future following the introduction of new species and the increase of aquaculture trade. Unknown acute mortality occurred in wild golden grey mullet Lisa auratus and Liza saliens in Iranian waters of Caspian Sea in recent years. In order to isolation and confirmation of causative agents of golden grey mullet mortality in the Caspian Sea, a complementary research investigation project was designed in 2005 and approved immediately in Iranian Fisheries Research Organization (IFRO). Many diagnostic aspects such as Virology (Cell culture and Elctereone Microscopy), Hemathology, Bacteriology, Histopathology, Molecular biology (NestedRT-PCR), Heavy metals measuerment and Serology (IFAT and IHC) were employed in mentioned multidiciplinary project. About 322 moribund fish samples which revealed skin darkening, erratic swimming behavior such as spiral and belly-up at rest and high distention of swimming bladder. Suspected samples were collected from coastal capture sites in iranian north proviences in 2006 till 2009. Targets tissue such as brain and eye were removed in strile condition and then kept in -80oC frezzer for cell culture and Nested-RT-PCR. Other tissue samples from liver, kidney, intestine, stomach, gill, skin and muscle, gall bladder and gonads were taken and fixed in 10% buffer formalin and same parts fixed in glutaraldehyde 3% for histopathology, IHC and EM respectively. Cytopathic effect (CPE) was observed in those cell cultures just six days after inoculation with the dilutions of the tested 312 homogenate supernatants. CPE in monolayers of cells cultured (SSN-1 cell line) was characterised by thin or rounded, refractile, granular cells with vacuoles. Nine samples were positive in virology assay. Nested- RT-PCR was done on suspected tissue samples and supernatant of CPE positive samples and 21 tissue samples and all CPE positive samples were positive. IFAT was selected as a confirmatory method for identifying viral strains replicating on cell cultures and carried out with rabbit anti-betanodavirus serum on suspected tissue samples and some smears of CPE positive samples. Some bright points approved betanodavirus antigen and confirmed cell culture and Nested-RT-PCR findings. In fixed tissue samples widespread and massive vacuolation were observed in brain, spinal cord, retina and optical nerve. In order to confirmation of diagnostic findings , IHC was done with monoclonal antibody antibetanodavirus and some red-brown points were observed. Theses findings revealed expected viral antigens and confirmed previous results. Moreover, virus particles with 25-30 nm in diameter were visualized in infected brain and retina using positive staining in TEM. Also pathogenicity test was employed to confirm the obtained results. So Guppy fish Poecilia reticulata and sturgeon fry were used instead of the experimental host due to ease of handling and susceptibility. After 15 days post infection, guppy bathed in VNN-infected tissue culture with 104 TCID50 showed clinical signs similar to naturally infected Golden grey mullet, and the mortality rate reached up to 100% in 75 dpi. When target organs were examined by cell culture isolation, serology, and histopathology, all revealed the presence of virus in the Guppy. Suspected supernatant injected to sturgeon fry through intravitreous injection and widespread vacuolation were observed in brain and spinal cord buy IHC and Real time PCR were negative. In conclusion, with attntion to obtained results in this investigation such as ecological factors, clinical signs, histopathological, virological and bacteriological results, molecular analysis, (IHC, IFAT, PCR), TEM demonstration, serological and hematological findings, it could be confirmed that VNNV was the main causative agent for disease outbreak in Golden grey mullet in Southern coastline of Caspian Sea.