An Ecology study on Artificial Reef in Hormozgan (Bandar Lengeh) 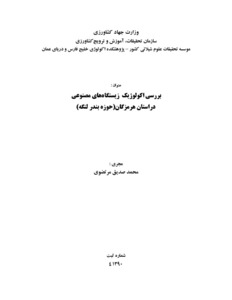 Uncontrolled fishing of marine resources in the world, has caused many commercial species to be at risk of destruction and extinction. Along with development of aquaculture, establishment of artificial reefs is considered one of important strategies to compensate loss of resources and overfishing. Accordingly, the project was based. Sampling of fish cary out from winter 2005 to Fall 2006 and for plankton, zooplankton, Iktyoplankton and bentoses from spring 2006 to winter 2006. The structures of Moloo artificial habitat had been arranged in seven rows at three depths (8, 9.5 and 11 m). Two control stations were considered one kilometer each side of the habitat. Sampling of physicochemical parameters and pollutantsand sediment cary out in summer and winter 2006 . CPUE and frequency of species, showed significant differences between seventh row (mixed structures) and six other rows (P<0.05); but species diversity did not (P=0.1). In this study, significant differences were not observed between different depths (P>0.05). Although mean CPUE showed high seasonal differences, but because analogous variance was also significantly different (P<0.05) ANOVA could not confirm significant seasonal difference for CPUE. Prepared video films displayed species several times more than trapped ones, around artificial structures.structures with variable configurations cause fishes with different behavioral characteristics to aggregate in the environment and species diversity to increase. Despite observing increased fish stocks, there is not sufficient reasons to prove fish production by artificial reefs, and this research needs to be continued. In this study, 43 phytoplankton genera including 28 Bacillariophyceae, 11 Dinophyceae, 3 Cyanophyceae and one Euglenophyceae were observed. Bacillariophyceae class was main category; Cyanophyceae had highest density in summer and Euglenophyceae just observedin winter. Zooplankton was mainly composed of copepoda and nauplius; Oikopleura, polychaete worms, molluscs, chaetognatha are in the next ranks. The highest density was seen in winter. Phytoplankton and zooplankton density were not significantly different between stations (P>0.05). Observed and identified ichthyoplanktons were pertaining to families Clupeidae, Gobiidae, Callionymidae, Engraulidae, Sciaenidae and Sparidae. The highest density was observed in summer; The highest mean annual density was related to Gobiidae. Benthos groups were including crustaceans, molluscs, polychaetes, nematodes, nemertines, foraminiferans, ophiurids and echiurans. There were obtained no significant difference between density of benthic organisms on surfaces of different structures. Despite significant seasonal differences between some physicochemical factors and water pollution (P<0.05), significant differences between stations did not exist; Mean water temperature in establishment area of structures, were obtained 32.9 0.5 °C in summer and 21.4  0.5 °C in winter. Due to the buffering properties of seawater, pH had a limited range of changes (8 - 8.95) with an average of 8.81  0.13. Average amount of transparency was 3.8  2.72 and 5.63  0.78 m. in summer and winter respectively. Annual averages of dissolved oxygen and salinity were 7.11  0.1 ppm and 39.13  0.26 ppt respectively. Annual average of nutrients including nitrate, nitrite and phosphate in the study area, were, 74.9  0.7, 1.44  0.09 and 0.97  0.06 µmol per lit. respectively. The average COD in the summer and winter is estimated 1.53  0.48 and 1.62  0.48 mg per ml, respectively. Mean values of copper, zinc, iron, nickel and lead were obtained 26.5, 54.3, 27.6, 70.85 and 48.15 µg per one gram of dried weight of sediment, respectively; Aliphatic normal hydrocarbons (C10-C30) have been measured in water and sediment samples.