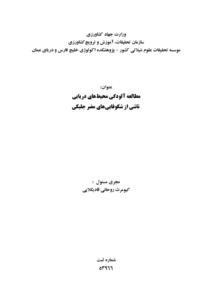 Although studies showed that the most Phytoplankton blooms usually provide positive impacts on marine environments, but blooming of certain species of phytoplankton may also have negative impacts. In recent years there has been a growing concern of the problems associated with red tides, which may induce mass mortalities of cultured fish or shellfish, and cause damage to aquaculture industries such as prawn culture and caged fish culture. Therefore, mass blooming of harmful algae in the Persian Gulf and Oman Sea may cause unexpected damage to fish stocks (through the production of toxins, oxygen, feeding on fish eggs and primary producers) and ecosystem aquatic and fishing communities are faced with a serious problem. The aim of the present study initially was to Isolation and determine the parameters affecting the growth and booms harmful algal, determine the growth and survival of vannamei shrimp Post larve in different densities of the algae, as well as the best, safest and most effective ways to control the blooming of this group of phytoplankton (physico-chemical), respectively. In order to provide optimum growth and bloom forming according to characteristics of each species, phytoplankton was sampled during the bloom conditions in the coastal waters of Bandar Abbass, Hengam and Qeshm Islands with cleaned sampling bottles from May 2012 to June 2015. The samples were then filtered through phytoplankton net (100 µm) and poured into bottles containing 1 liter seawater and were sent to the Persian Gulf and Oman Sea Ecology Research Laboratory under cool conditions. After adaptation in filtered seawater, some species were isolated by positive phototropism characteristic. They were grown in modified media culture at different salinities (30, 32 and 35ppt), temperatures (20, 23, 26 and 28ºC) and intensities (35, 70 and 90 µmol m-2 s -1 ). During this part of study, three species of dinoflagellates, Protoperedinium sp., Noctiluca scintillans and Cochlodinium polykrikoides were identified, but we could isolate only Cochlodinium polykrikoides species. The first dinoflagellate species was Noctiluca scintillans which only survived for 4 months during several replacement of culture media (F/4) under salinity of 32 ppt, temperature of 25ºC and 11h light: 13h dark photoperiod regime. The next dinoflagellate species which formed temporary blooms was Protoperedinium sp., but was not be isolated by conventional culture media. Finally the last dinoflagellate species which we could success to isolate was Cochlodinium polykrikoides. The results of Isolation and determine the parameters affecting the growth and booms harmful algal, clearly showed that the highest alga biomass and growth rate was obtained following culture under the A2 medium, 32ppt salinity, 26°C temperature, and under at a light intensity of 90 µmol m-2 s -1 provided by cool white fluorescent tubes. Maximum cell density of C. polykrikoides in a 5 liter Erlenmeyer reached to 1.6 × 106 cell L−1 including chains of 2-12 cells and sometimes 16 cells for twenty days. Based on the results from the present study, providing suitable media culture and physical condition, bloom forming of C. polykrikoides start from day 8 to 10 and will be continued until day 24 to 28. In the other hand, C. polykrikoides cells immediately crashed and destroyed. In order to investigate the best, safest and most effective way to control of harmful algae blooms, we used physical methods (slurry clay: 0.5, 1, 2, 4 and 10 gl-1 ). The results of the physical assay showed that the growth of C.polykricoides was strongly inhibited by using clay slurry in 4 or 10 gl-1 . The removal efficiency of C. polykricoiedes by clay was 99% after 24 hours. The results of the physical assay on Protoperidinium quinquecorne showed that the growth was strongly inhibited by using clay slurry in 4 or 10 gl-1 . The removal efficiency of Protoperidinium quinquecorne by using 4 gl-1 clay was 99% and 10 gl-1 was 98 after 24 hours. However, using clay could be considered as an effective strategy to control HAB’S in the Persian Gulf coastal waters. Finally, in order to survey the effects of various densities of harmful algae on growth and survival rate of post on white leg shrimp postlarve, the vanamei shrimp postlarvae were exposed to different densities of C. polykrikoides (20000, 600000, and 2000000 cell/l) for 6 weeks culturing period. The results clearly showed that there were no significant differences between growth and survival rates of shrimp postlarvae exposed to different densities of C. polykrikoides during the experimental period.