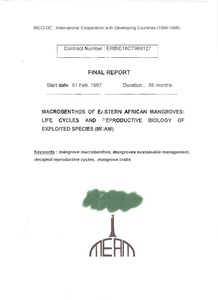 The MEAM objectives were: 1) to determine patterns in population structure, along a geographic gradient, of species selected for their commercial and/or ecological importance, by means of a standardised protocol to be developed within the project, 2) to study the growth. population structure and reproductive patterns of the above species, 3) to investigate the temporal pattern of larval release, 4) to analyse the behaviour of the pelagic larvae leading them to settle on the substratum, 5) to study the genetic flow between several coastal populations of a key species, in order to evaluate its interpopulation migratory effect, 6) to identify the relationships between the macrobenthic species and, more generally, the mangrove ecosystem and human activities. At different levels, all the MEAM objectives were fulfilled: 1) a technique of visual census of macrofauna was designed and repeatedly tested, providing comparable results independently of the observer and locality; for the first time, there is a simple method that permits any type of monitoring and ecological survey to be comparable in time and space. Validation coefficients (between 50% and 80%) are also available to correlate the census results with the actual animal density. From stomach content analysis, we could prove that, all along the East African coast, Scylla serrata, one of the most commercially important species, spends most of its time within the mangroves, feeding on macrobenthic species. In contrast, several important prawn species were only found as juveniles; thus for them, mangroves act as a nursery. In both cases, the importance of a healthy mangrove system is the basis for a sustainable management of the stocks of these species. 2) For the first time, we are able to compare the reproductive cycles of different species. Different patterns appear to dominate decapod life: periodic breeding can be found (i.e. Uca vocans), together with both semi-lunar and lunar periodicity; the latter is concentrated in a short period of the year (Neosarmatium meinertl), through most of the year with an interruption for the rainy season (i.e. Sesarma ortmanni) or throughout the year (i.e. U. annulipes). Due to the accurate and synchronous sampling strategy, we can for the first time ensure that the different reproductive patterns actually concern the basic biology of the species and not just latitudinal, geographical, or micro-climatic variations. 3) The results indicate a universal pattern of semi-lunar release centred on post-crepuscular ebbing tides and they allow us to generalise patterns of release for mangroves, namely the cyclic character of the reproductive timing and its relation to the major environmental cycles. 4) Patterns of larval fluxes and settlement in mangrove areas were described and they show a universal character: most species in mangroves will export their newly hatched stages to adjacent neritic water masses where they undergo most of their larval development. Return migration is accomplished by megalopa stages, and our results indicate an interaction between deterministic (cycles of tidal amplitude) and stochastic (wind stress) factors in the recruitment success of the different species. 5) We studied about 530 bp (base pairs) of the mitochondrial DNA cytochrome oxidase subunit I (mtDNA COl). The results indicate that gene flow is unexpectedly low and suggest that a population structuring is currently occurring. In order to prevent inappropriate S. serrata resource exploitation, it is advisable to refer to the local population as the appropriate short-term management unit. 6) The relationship between human activities and the mangrove ecosystem proved to be quite different among the three study sites: mainly timber cutting - mostly illegal - in Kenya; charcoal activity in Zanzibar; artisan fisheries and small-scale gathering in Mozambique. Where mangroves are seriously threatened (Kenya and Zanzibar), our detailed enquiries showed that people are well aware of the ecological and geo-morphological importance of mangroves. Nevertheless, due to the lack of alternative sources of revenue, they will not easily refrain from their destructive activities. Eco-tourism or similar activities are not seen as adequate alternatives, while cattle breeding or increased coconut cultivation could be. Unfortunately, both of these activities are limited by the lack of financial investment (cattle) or available land (coconuts).