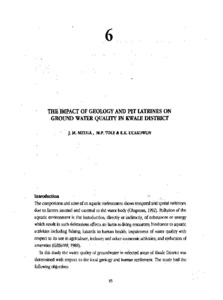 Dissolution of rocks and infiltration from pit-latrines can cause pollution of groundwater. In this study, TDS, TSS, conductivity, COD, BOD, dissolved oxygen, calcium, Magnesium, sulphates, chlorides, fluorides, coliform counts and Escherichia coli as well as pH and temperature, were determined from selected borehole, springs and wells in Kwale District, Kenya, underlain by either sandstones or coral limestone. Water samples were taken from each of the water sources between September and November 1993 which represented the wet season (short rains) and between January and February 1994 which represented the dry season. Data for most parameters i.e. conductivity, TDS, CL super(-), F super(-) Ca2 super(+), sulphates with means 706.7, 487, 175, 0.3, 74, and 10.4 respectively. The pH showed no change, with a mean of 6.63, while dissolved oxygen, COD, BOD, and coliform counts showed a decrease with means 0.64, 151, 1.61 and 160.5 respectively. Analysis using trilinear plots showed the major anions as chlorides and bicarbonates while the major cations are calcium and sodium. The safe distance to locate a pit latrine from a water source in sandstone regions is recommended to be approximately 120m, while in limestone regions it should be at least 150m.

Title of Parent Book or Report